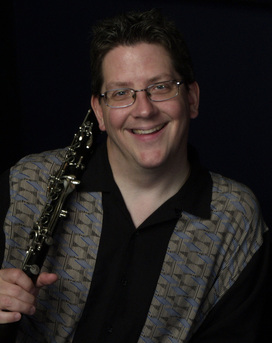 Pat O'Keefe is a multifaceted performer who is endlessly active and in high demand in a wide variety of musical styles and genres. He has performed as a soloist with symphony orchestras and wind ensembles, played for belly dancers, and rocked samba in the streets.

Pat draws upon this multiplicity of experiences and interests in his performances, which employ a "superb control of extended techniques," and have been described as "passionate," "explosive," and "breath-stoppingly exquisite." He is currently the co-artistic director and woodwind player for the contemporary music ensemble Zeitgeist, based in St. Paul, Minnesota. With Zeitgeist he has premiered over two hundred new works, and has performed throughout the United States and Europe.

Pat has also performed and recorded with other noted new music groups around the country, including ETHEL, California E.A.R. Unit, and Cleveland New Music Associates, and has appeared often as a soloist at the SEAMUS, Spark!, and the Third Practice festivals.  Pat began his career as an orchestral clarinetist, serving as the principal clarinetist for five seasons with the Augusta Symphony in Augusta, Georgia, and he continues to be in demand as an active chamber musician.

Active in the improvised music and world music communities as well, Pat is a founder and co-director of the large improvising ensemble Cherry Spoon Collective, the electro-acoustic duo Willful Devices, and has appeared in concert with such notable improvisers as George Lewis, Anthony Davis, Wadada Leo Smith, and Fred Frith.

Pat’s music making is heavily influenced by the music of other cultures, having studied Turkish music with Turkish Rom clarinetist Selim Sesler, and Brazilian music with master drummer Jorge Alabe. He is one of the founding directors of the Brazilian percussion group Batucada do Norte, and appears regularly with the groups Choro Borealis, and Music Mundial in the Twin Cities.

Pat holds a BM (with Performer’s Certificate) from Indiana University, an MM (with Academic Honors and Distinction in Performance) from the New England Conservatory, and a DMA from the University of California, San Diego. He is currently an Adjunct Professor at the University of Wisconsin, River Falls. He taught previously at UCSD, Augusta State University, and Georgia College. Pat is a recipient of the 2015-2016 McKnight Artist Fellowships for Performing Musicians administered by MacPhail Center for Music.